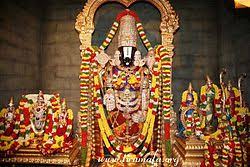 Fast Facts
Location: Chittoor, Andhra Pradesh, India
Built By: King Thondaiman
Architectural Style: Dravidian
Dedicated To: Lord Venkateswara
Tradition: Vaishnavism
Major Festivals: Brahmotsavam, Vaikunta Ekadasi
Lord Venkateswara Temple at Tirumala (Tirupati) is one of the most famous temples in India. With more than 35 million pilgrims visiting the temple every year, it is one of the most visited holy places and also one of the richest temples in the world. Built on the Venkata Hill, which is a part of the famous Seshachalam Hills, Tirupati Temple is considered as one of the holiest shrines by the Hindus. According to a legend, Lord Vishnu assumed the form of Sri Venkateswara to save mankind from the adversities of Kali Yuga.
History & Legends Associated with the Temple
There are many legends associated with the origin of this age-old temple. The larger than life statue of the main deity is said to have formed on its own, making it one of the eight ‘Swayambhu Kshetras’ (self-manifested image) of Lord Vishnu. Many ancient texts, including the Rig Veda mention the existence and prominence of the temple. Written texts, which are dated back to the Mauryan and Gupta era, refer the temple as ‘Aadhi Varaha Kshetra’. In fact, many other texts and theories link the history of Tirupati Temple to Lord Varaha, one of the ten avatars of Lord Vishnu. According to a legend, Lord Varaha created the entire Seshachalam Hills so that Adisesha, the seven-headed snake on which Vishnu rests, could rest on earth. Interestingly, Seshachalam Hills has seven peaks, which are said to be the representation of the heads of Adisesha.
As far as the construction of the temple is concerned, King Thondaiman of Tondaimandalam kingdom constructed the precincts and the towering gateway (Gopuram) of the temple. He also made sure his subjects worshipped the Lord regularly.
The construction of the temple too has many legends associated with it. One such legend has it that Lord Vishnu appeared in King Thondaiman’s dream and asked him to construct the temple. The temple was later expanded by various kings and emperors who ruled over the place. Starting from 300 AD, the Tirupati Temple was built over a period of time. One of the earliest recorded evidences state the generosity of Pallava queen Samavai; she had donated precious jewels and 23 acres of land for celebrating the major festivals of the temple. During the Chola dynasty, the temple was developed further as many Chola Kings embellished it with riches. When the Vijayanagara Empire took over, diamonds and gold were donated to the temple. Krishnadevaraya, one of the famous Emperors of Vijayanagara, visited the temple on multiple occasions and contributed to the construction of the temple.
After the decline of the Vijayanagara Empire, the temple was patronised by several kings until the advent of the East India Company. When the British took over the temple, they leased it for various purposes to different tenants. The East India Company then bestowed the administration of the temple to the chief priest of Hathiramji Muth. The Hathiramji Muth administered the temple until 1933, after which the ‘Tirumala Tirupati Devasthanam’ (TTD) took over the administration of the temple. In 1966, a court order transferred the administration of the temple to the government of Andhra Pradesh. This order was rolled back in 1979, when the administration of the temple was vested to the members of TTD. A committee, including a couple of members representing the government of Andhra Pradesh, was formed for running the day-to-day administration.
Architecture
Built in accordance with the Dravidian style of architecture, the temple has three entrances, which lead to the sanctum sanctorum. The first entrance is called as ‘Mahadwaram.’ A towering gateway (Gopuram), measuring 50 feet high, is placed right in front of the first entrance. The temple has two circumambulation paths. While the first path houses many pillared halls, flagstaffs and a dedicated area to distribute the offertories, the second path has many sub-shrines, main kitchen, main hundi and many other important edifices. Guest houses and various food counters have been recently constructed for the benefit of the pilgrims. A gold-plated tower inside the main shrine is called ‘Ananda Nilayam’ and is the most important part of the temple. The inner temple of ‘Ananda Nilayam’ houses the main deity and was constructed around the 12th Century A.D. It was later reconstructed throughout late the 1950s to 1960s. The temple also has a holy pond called Swami Pushkarni, located towards the northern side. Pushkarni, which covers a huge area of 1.5 acres, is one of the most sacred places of the temple. A legend has it that the pond was carried to the hills all the way from Vaikuntham (Lord Vishnu's abode) by Garuda. Saluva King Narasimha Raya constructed a pillared hall at the center of the pond in 1468.
Deities
There are shrines of many deities within the complex of the temple. One of them is the shrine of Lord Ram, Sita, Lakshmana and Hanuman. The temple also has shrines dedicated to Lord Krishna, along with his consort Rukmini, Vishvaksena, Sugriva and Angad. While Sugriva and Angad are prominent figures from the Hindu epic Ramayanam, Vishvaksena is Lord Vishnu’s attendant who oversees the Lord's wealth. Apart from these deities, there are five principal deities and they are mentioned below:
Reactions: